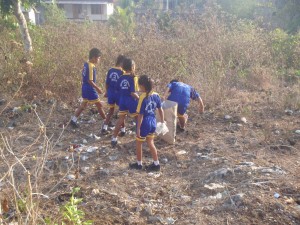 Project AWARE’s International Cleanup Day was a success for the ROLE Foundation as fifty local school children joined ROLE local staff and volunteers, to clean the Sawangan area and Geger Beach on Saturday morning. After meeting at ROLE’s recently opened Eco Learning Park gates, the team set out on their trash removal mission. They eventually removed a full truckload of trash from the street sides, streambeds, under brush and beach access roads of the area. The volunteers were tired yet happy as they finished at Geger Beach itself.

ROLE understands that trash discarded on land will eventually find its way into the ocean, thus the initial focus on the Sawangan village and beach access roads. The route chosen also served as a demonstration of the positive impact cleanups of this type can have in the local community.

The youth of Sawangan were made aware of the benefits of trash removal, in particular the collection and correct disposal of plastic. The effort was supported by the local banjar (Head Councilor) in a further display of community awareness and education. Working as a team they helped make their village more beautiful and had fun in the process!