The Threat Behind the Charm of the Beaches in Bali 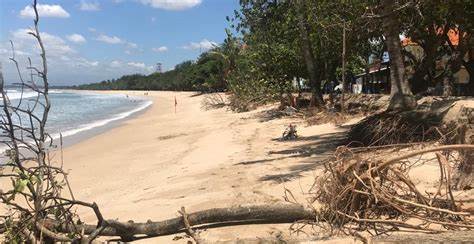 Bali is a leading tourism destination in Indonesia. There are many natural and cultural beauties that this island of the Gods has to offer to tourists who come from inside and outside the country. One of those charms is its exotic and eye-catching beaches. However, the beauty of the beaches in Bali is now under threat due to coastal abrasion which is slowly but surely eroding the beaches.

Since 1980, beaches in Bali began to experience significant erosion and deterioration of the coastline. The areas with the most obvious impact are the southern parts of Bali, such as Klungkung, Gianyar, Denpasar, Badung, Tabanan, and Jembrana Regencies. According to data from the Bali Penida River Basin Office, more than a third of the coast in Bali has been hit by abrasion in the last two decades. The impact of coastal abrasion in these areas varies depending on the location. The most severe coastal abrasion was recorded at 30 meters, eroding the coastline in the south of Bali. In Kuta District, such as Tuban Beach, Kuta Beach, Kedonganan Beach, Legian Beach and Seminyak Beach have the clearest track record of beach abrasion. According to government data, there was 5-15 meter abrasion on Legian Beach and Seminyak Beach between 1981 and 2010.

The image above is the result of Landsat satellite imagery recorded in 1972 – 2020 at Kuta Beach. We can see that there has been a significant setback from the 1972 coastline (dark blue line) and the 2020 coastline (light blue line). This shows that the impact of abrasion in Bali is very worrying and can have a negative impact on the environment, society, and the tourism sector.

Causes of Coastal Abrasion in Bali

There are two factors that lead to coastal abrasion, namely natural and human factors. Natural factors include climate change, wind speed, wave strength, and ocean currents. While the human factor includes building construction that does not consider the environment. Massive construction in coastal areas in Bali causes changes in ocean currents and wave strength. An example is coastal abrasion that occurred in Denpasar such as Sanur Beach and Serangan Beach caused by the reclamation project on Serangan Island.

According to reports from the government, more than 100 km of coastline in Bali has been laid with piles of limestone to break and hold the waves. In general, there are two ways to prevent coastal abrasion from occurring. First, the Hard Structure Technique, namely the accumulation of rocks and breakwaters to anticipate perpendicular waves. Second, the Soft Structure Technique will be planting mangrove forests or trees in coastal areas. What we might be able to do is a campaign for the importance of mangrove forests and take action to plant pine trees and mangroves on the beach.